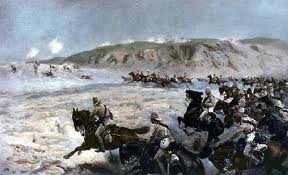 “Yes, I was afraid once, child,” Mildred nodded, the tiny cabin pitching in the terrible swells. “Very scared.”

“I bet you couldn’t sleep either?”

“Now, little Molly, you have no reason to fear,” she tried to look stern, “and every reason to get some rest.”

The first class cabins of the RMS Olympic were beautifully provisioned, burnished dark wooden fittings, fine dun leathers, deep burgundy satins, it seemed as safe as the Palace of Westminster. Mildred, by appearance a dowager, by experience a frontiers-woman, was loathe to let the little girl’s imagination win out.

“Tell me gran’mama,” Molly mewed from within her heavy eiderdown. “Tell me about you being afraid.”

“No, my child, now you are beginning to vex me.”

Terrible thunder crashed outside, brightening the porthole with stark light sending Mildred’s thoughts back to that dark time.

“I was in Kimberley, in South Africa. My late husband Gerald, may God rest him, was busy making our fortune in diamonds, but the Boers had invaded, they had us surrounded.”

“Who were the boors, gran’mama?”

“Oh, child, they were just settlers, just like us really. There had been trouble for years. War came and they cut off our town. We could have fled of course, but Gerald would not leave his precious mines. ‘It will all be over in a month,’ he said.”

“Did they have guns?”

By day, spotters could see the smoke from the howitzers a full seventeen seconds before the shells hit, but by night there was no warning. The people of Kimberley were lowered into the mine tunnels at dusk to avoid the terror.

Mildred sat in the dim glow from the Davy lamp by means of which Gerald was perusing his papers. She was stroking Edwina’s forehead, trying to lull the child’s fears.

“Is John going to fight in the war?” the girl whispered.

“But he joined up. With the volunteers.”

She looked across at her husband, calculating his profits and losses.

“Gerald,” she called to him gently. “Gerald!”

“What?” There was a crease of annoyance on his brow, visible even in the half light.

“What are we going to do about John?”

“How are we to stop him joining the volunteers? He seems so determined.”

“Stop him? What tosh, woman! Why would we want to stop him? Best thing the oaf has ever done.”

“Oh Gerald no, you can’t possibly mean it, you simply can’t!”

He stared at her over the wire rims of his spectacles, dark moustache wrinkling.

“Can’t mean it? In case you had not realised, it is becoming apparent that we can’t rely on General Roberts to lift the siege any time soon. Here is our son offering to do what the damn expeditionary force choose not to. Yet you see it as your task to stop him?”

He turned his back on her and hunched the Davy lamp a little closer to his work. Mildred listened to the distant booming.

“Oh my!” The little girl, far from being lulled to sleep, was now sitting up, eyes wide. Mildred found that as she spoke the images were more alive to her than ever.

Crossing the town was a hazardous affair. The ground was split from stray shell blasts leaving muddy puddles. If the spotters yelled out, she would have to throw herself into some makeshift cover, it was no task for a civilised lady. Mrs. Kekewich met her at the front door, there being no servants that were not seconded to the defence effort.

“I’m afraid you might not have come at the best moment,” she said when Mildred arrived.

As if on cue, there came the sound of aggressive shouting from one of the rooms, and next moment a bombastic man, face red from anger, came spitting phlegm as he stormed passed the ladies without acknowledging them. Mildred recognised Cecil Rhodes, one of the founders of De Beers and almost a god in the eyes of her husband.

“Darling,” Mrs. Kekewich rushed into the room, “are you quite alright?”

“Alright now that he is gone, my sweet.”

The General was sitting behind his desk, trembling with fury. His wife poured him a stiff whisky from the mahogany cupboard. Mrs. Kekewich introduced Mildred, explaining that she was here about her son, still just a boy, now signed up for the volunteers. The General listened as he sipped.

“Indeed you must be very concerned, Madame?”

“I am so sorry to be taking your valuable time, General, but yes, I am desperately afraid. I had thought you might… Well, perhaps such a young recruit might be set to some lighter duty, guarding a food store perhaps.”

“If I could, madame, be most assured I would. Alas, I am barely in control of my own command. I am afraid that Rhodes and De Beers run all the local militias and police.”

The words struck Mildred’s heart with a cold chill. She could feel tears come to her eyes, but would not let her dignity fail her. Her only hope lay now with Lord Roberts, that his forces might lift the siege before the volunteers were trained.

The storm outside was still raging, though the thunder was easing.

“What happened, gran’mama? Did they lift the seals?”

“Siege, dear,” smiled Mildred. “Eventually. The tide was turned by force of numbers. But, for us, it was too late…”

Each afternoon, as the volunteers gathered on the playing fields. Mildred took a deck chair to the pavilion and watched them as they were drilled up and down. Rhodes had refused to even see her, and Gerald would not dream of bothering his employer at a time of financial crisis. She watched boys drilling. If De Beers did one thing well it was spending money; the volunteers had fine horses and martial uniforms. Each day that they reconvened on the parade ground was one more that they were away from the withering gunfire of the Boer Mausers.

One morning they learned there had been a sortie, a small group of regulars on horseback slipped out of the village by cover of the pre dawn gloom, took a nearby kop and destroyed three guns mounted on its heights, escaping back to safety before the sun rose. There was to be a repeat raid the next morning, General Kekewich himself announced to the boys. The regular troops were to storm a series of guns on another kop, the volunteers would guard their retreat.

As he left the ground, Kekewich came to Mildred, but she could not raise her eyes, and she sensed he was unable to speak.

She did not sleep that night, nor did John. She flattened every crease, dabbed at any hint of a stain on his new uniform. She served him tea and porridge though neither could eat. Long before dawn she  watched him ride into the ranks of the Volunteers and fade into anonymity amongst the other uniforms.

Kekewich was in the habit of keeping station each morning on the conning-tower of the De Beers mine. The climb up the ladder was precarious, but this was not going to stop Mildred from sharing the view as the sun rose over the veldt.

In the darkness, they heard the rattling of bridles and the clop of hooves from the edge of the defences, then the hooves became a deep thundering noise which faded to the silence of the night. A horrible time passed before the sound of rifles sprinkled vivid cracks of light across the veldt.

When dawn finally cast its burnt sienna fingers across the plains and between the hills the scene was horrifying. Riderless horses wandered, bodies lay, the Boer guns were intact, and only a handful of the troops had returned, none of the Volunteers.

“Were you upset, gran’mama?” The girl’s eyes were wide.

“Yes, child, I was devastated. I watched for three days, not daring to shut my eyes in case he might come back. Gerald came to me, he had found grief, realising what he had lost and how little value there was in those cursed diamonds. He carried me down, near unconscious, with a strength that kept me close to him till the end of his days.”

Outside the thunder had ceased, and it seemed to her now as if an armistice had been declared between the heavens and the earth. It was time to remember with sadness all those who had passed. In the great battles that had been fought during her lifetime a terrible number had fallen.

She was disturbed from her reverie by the sudden awareness that they were no longer alone in the cabin. There stood a man, tall, with handsome features, his dinner jacket decorated with five silver medals.

“Daddy,” shouted Molly, throwing herself upon him. “Gran’mama thought you had died in Kimberloo.”

“That old story,” he laughed. “And at this time of night. Why yes I might have died, we were chased by the Boers for days, unable to make a path back to the town. Chance, or fate, took us into the path of General Robert’s cavalry. I rode back into town at the head of the column…”

The warm breeze of the veldt touched Mildred’s cheek as her beautiful son laid his daughter gently down to sleep.

Guess who has a brand new iPod… Smug git! 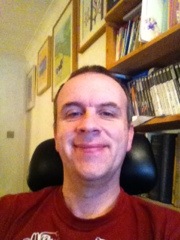 I was delighted to hear that my story “Is this what I am for” has been accepted by MunsterLit for their Southword Journal Online http://www.munsterlit.ie/Southword/home.html. Should be appearing there in July.